I’ve had this idea for a banana soap in my head for quite some time. Something like a banana cream pie soap maybe. But what would the end result look like and would I be happy with it? I started to do some research and saw a variety of banana soaps that ranged from very brown to very speckled to creamy yellow with few specks. Some soap makers reported the specks would disappear after a while. Well, I decided it was time to do my own little research project on using bananas in soap.

Here’s what I did:

Using Bananas in Soap Trial No.1:

Using Bananas in Soap Trial No.2:

The gelled soap – no surprise here – turned brown, but with more speckles. The non gelled soap has a lot more tiny specks as well with colors ranging from brown to almost orange.

The pictures you see in this post were taken after a 2 week cure. I didn’t notice the speckles becoming over time, and if anything they became more especially with the ripe banana. But I will keep an eye out for any changes and as always I will update this post in 6 months with a follow up picture.

I made this recipe twice using the same amount of banana puree for both batches. The only difference was the ripeness of the banana. This recipe is superfatted at 5% and uses a lye concentration of 40% (which is steep, but accounts for the added liquid coming from the banana).

Have you tried using bananas in soap before? How did it turn out?

Until next time. Happy Tinkering!

Looking for more natural soap recipes? How about: 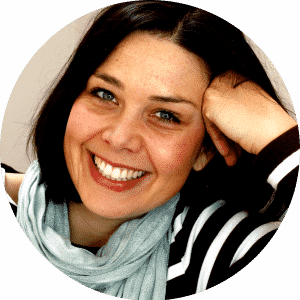 Hello and welcome. I’m Celine and I make stuff. Stuff that’s pretty, useful and good for your skin.

Why don’t you come along for the ride? It’ll be fun, I promise.